If you are lucky enough to be part of a couple who has received the lowest accolades possible in the comedy world, but still find themselves hilarious, you may end up here:

Steven makes a joke
*crickets*
Steven: That was funny.
Shantini: Nope, it wasn’t.
Steven: Yes it was.
Shantini: I’m pretty sure it wasn’t.
Steven: Well, ONE of us is paid to do comedy, so I think that’s the person whose opinion should be taken as fact when discussing whether or not that joke was funny.
Shantini: Right! I forgot! How WAS that improv show for the 7th Day Adventist New Years Party?
Steven:…good.
Shantini: And how about the Christian College’s Women’s Soccer Fundraiser Luncheon?
Steven:…it’s next week.
Shantini: Right. Must be so satisfying to be paid for comedy. For me, it’s not so much about the money, but about the art. For instance, if we knew anyone who had been featured on the front page of Huffington Post Comedy, that would be impressive. Do we know anyone like that?
Steven: Yeah, maybe.
Shantini: Because I would think, someone featured on the front page of Huffington Post Comedy, next to Bill Burr and The Muppets, would have an indisputable handle on whether or not a joke is funny. We’d just have to take that person’s expert opinion.
Steven: I suppose.
Shantini: Right. So I guess that’s settled.
Steven: How much money did you make from that video again?
Shantini: I don’t want to talk about it. 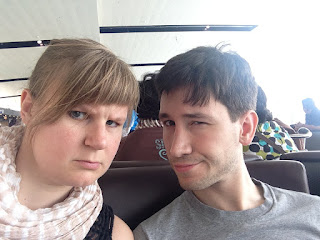