When you go to therapy you get treats. This is your mother talking.

Kids and adults both need treats sometimes, especially when we do something hard. Therapy is hard because it makes me feel really, really, really bad for a while and then better later. It's not your fault, it just is.

I still don't know what to say to you, but last night I played you some songs. Up until now, our musical diet has been a mainstay of gangster rap and the cast recording of Hamilton. Hamilton is still rap but decidedly less gangster. Last night, though, I held my phone near you and played "The Book of Love" by Peter Gabriel and "Don't Think Twice It's All Right" by Bob Dylan. They are songs that make me feel big things by men that feel big things and I hope you will be a boy and a man who feels big. I don't know if feelings are teachable, but if they are, I think Bob Dylan is a good start. 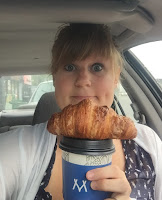